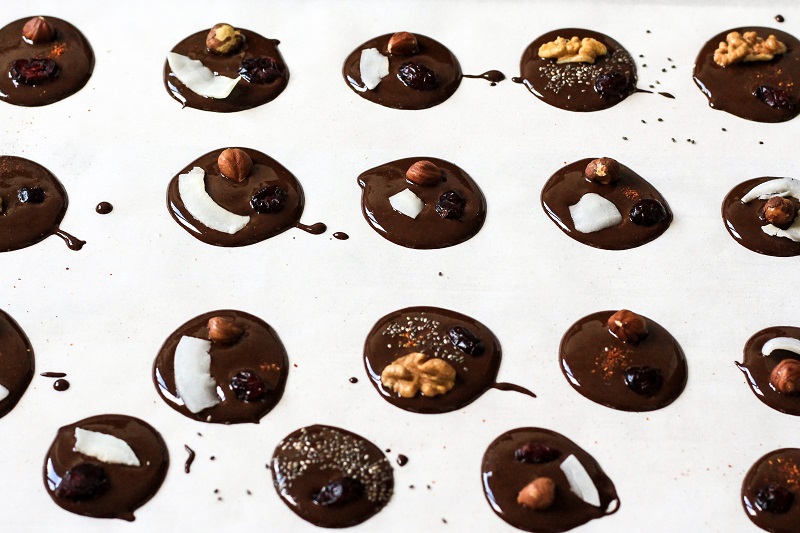 When you search for vegan keto chocolate, most of the results you get are recipes for vegan chocolate fat bombs, which can be delicious, but are not the be-all, end-all of the keto chocolate category. In fact, as long as you only eat a tiny amount, any chocolate could be keto-friendly and many are vegan. The issue is that most of us don’t want just a small amount at a time!

One huge benefit of following the keto diet is also that it lets us eat most of the fatty foods that a typical diet wouldn’t, like coconut oil and chocolates. But as you probably know by now, relatively little chocolate is both vegan and keto-friendly. So I’m here to ferret out what our options are, one bar of {vegan keto} chocolate at a time.

What Is Keto Chocolate?

Most brands define “keto chocolate” as a cacao-based treat sweetened with allulose, erythritol, inulin, monk fruit extract, stevia, or xylitol, or even a tiny amount of sugar. Some keto chocolates also contain nuts or even dairy milk powder, though the latter are obviously not vegan. People following a keto diet generally try to consume fewer than 50g net carbs per day, and generally fewer than 20g net carbs per meal, which means severely limiting sugar intake.

This adds up to relatively few keto-friendly dessert options, even fewer of which are vegan. Chocolate is, however, an inherently plant-based food and only gets healthier as the cacao percentage climbs. You see, cacao is actually a fermented and dried seed, roasted & peeled before it’s ground with sweetener to make chocolate. In its most basic form, all chocolate is vegan.

The reason humans dared add milk to chocolate in the first place was in an attempt to lessen the bitterness of the beverage, a characteristic which can be addressed by using higher quality fine flavor cacao. Yet as with most things, humans tended towards the cheapest option and then disliked the flavor, and so they wrote off the whole category. Keto chocolate can be delicious, and vegan!

Since many keto chocolate brands use milk powder as a smoother, lessening the flavor impact of high cocoa percentages, most of those options are off the table immediately. Luckily, these days there are lots of dark chocolates or even vegan milk chocolates made for the keto diet. Most keto chocolates are sweetened with sugar alcohols and fibers, which while vegan, can be tough on your stomach (if consumed in large quantities).

But if you want to stay in ketosis but stick to your vegan ethics, we’ve got you covered. First of all, all the leading keto chocolate makers use either tiny amounts of vegan sugar, or a sweetener blend which makes use of erythritol, xylitol, inulin, stevia, allulose, and/or monk fruit. Erythritol, xylitol, and inulin are equal to or less than the sweetness of sugar, but all cause digestive upset if consumed in large quantities.

Stevia and monk fruit are both a couple hundred times sweeter than white sugar, so they have to be used in miniscule proportions to avoid chemical overload on your tongue. Since all these common keto sweetener options are vegan, there’s no issue there, but many chocolate brands do use various forms of milk powder or butter oil in their products, so it’s important to look closely at ingredients lists.

These days there are a variety of keto chocolate options that have zero net carbs and zero dairy. Looking online, there are over a dozen keto chocolate brands, though three of them really stand out: ChocZero, Lily’s, and CHOCXO. One thing to consider about keto vegan chocolate is that the focus is on following keto principles, and therefore the most important consideration is the net carbs.

After that, the flavor is somewhat taken into account— but most companies seem to forget it in favor of adding a bunch of flavorings or taking a you’ll-eat-what-we-give-you stance. Personally, I tend to stay away from any chocolates made with a “cause” in mind, from those trying to save wildlife to the ones trying to up your daily fat intake. It distracts consumers from the fact that they’re not undertaking the costly step of directly sourcing quality cacao. Regardless, here are my picks:

ChocZero.
ChocZero is a rather young keto chocolate company, and while they have several vegan product options, they are not fully vegan. However, their main focus as a company is making keto chocolate & other keto sweets, so there’s a lot of promise there. ChocZero’s line of vegan options is sweetened with a corn fiber & monk fruit blend, and includes dark chocolate peanut butter cups, dark chocolate barks & bars, and dark baking chips.

Lily’s Sweets.
Now over a decade old, Lily’s chocolate was originally formulated as a maltitol-free, sugar-free chocolate option, especially aimed at people looking to lose weight. The homemade treats are now made at a much larger scale, and while the white & milk variations use dairy, all of Lily’s dark chocolate options are vegan and keto. Their line is sweetened with a blend of inulin, erythritol, and stevia, and includes chocolate bars, baking chips, and dark chocolate peanut butter cups.

CHOCXO.
A small company founded in California in 2014, just a few years later CHOCXO packed up & moved to Vancouver, Canada, where they expanded their brand. From the beginning, their focus has been on making chocolate straight from the cacao bean, though recently they settled into the keto chocolate niche, limiting their use of processed sugar. Not all of CHOCXO’s line is vegan, and it’s only keto-approved in their small serving sizes, but their large line includes chocolate squares, almond butter cups, and chocolate-covered nuts.

As years pass, it seems even easier to find vegan sweets for keto, but keep in mind how complicated chocolate is as a food. Consider buying vegan craft chocolates from small local companies, or even asking your local chocolate maker to begin making high-percentage bars. For now, ethical craft chocolate makers with vegan keto chocolates include The Good Chocolate, Primo Botanica, Raphio, and Amedei.

Note that massive players like Green & Black’s, Lindt, Ghirardelli, and Hu’s have vegan options, but aren’t particularly transparent in their sourcing.

Where can I find keto chocolate? You can now find it in a ton of places! Everyone from Thrive Market and Amazon to your local craft chocolate maker has some form of keto friendly chocolate.

But if you have any old vegan chocolate on hand and you want to check if it’s keto-friendly, just look at the nutrition facts and see how many carbs there are per serving, take away the grams of fiber, and you’ve got the net carbs per serving. If that’s fewer than 5g (or whatever your personal limit), then you’re golden!

What chocolate can I eat on vegan keto? While I have shared some brand recommendations above, if you’re shopping in the typical grocery store, you’re basically going to be left with super high percentage chocolates made with cheap, bitter cacao. So before you invest in some keto-friendly vegan chocolates you might hate, first think about how much of that chocolate you’ll eat per day.

If you plan to eat around 50g (2oz.), look for chocolates with 90% cacao content or higher (5g net carbs per serving), but if you want to eat a whole 100g bar, I’m just go for 100% cacao. Be warned, though, unless you’re buying a craft chocolate, you’ll probably find it quite astringent and bitter. I highly recommend trying three or four brands and then buying in bulk directly from the company.

How much chocolate can I eat on keto? This depends on how many calories you’re eating otherwise, but a vegan, keto-approved chocolate can be good for you. Well that is, as long as you’re eating high quality chocolates made with clean, mold-free cacao, purchased fairly. This is because cacao, the base material for chocolate, is actually high in healthy fats, antioxidants, and essential nutrients like magnesium & zinc. Buuuut I’d still stick to less than 100g (3.5oz) of quality chocolate a day, for calorie reasons.